Dealing with road traffic is a daily part of life for almost all members of society. As a result, traffic safety is an ever-present issue whose importance increases in line with increases in traffic density. According to a study by the road safety campaign “Get Off Gas”, one casualty in a traffic collision affects an average of 113 other people – family members, friends, acquaintances and emergency services personnel –, sometimes permanently.

Achieving this objective will require taking every opportunity to improve traffic safety! 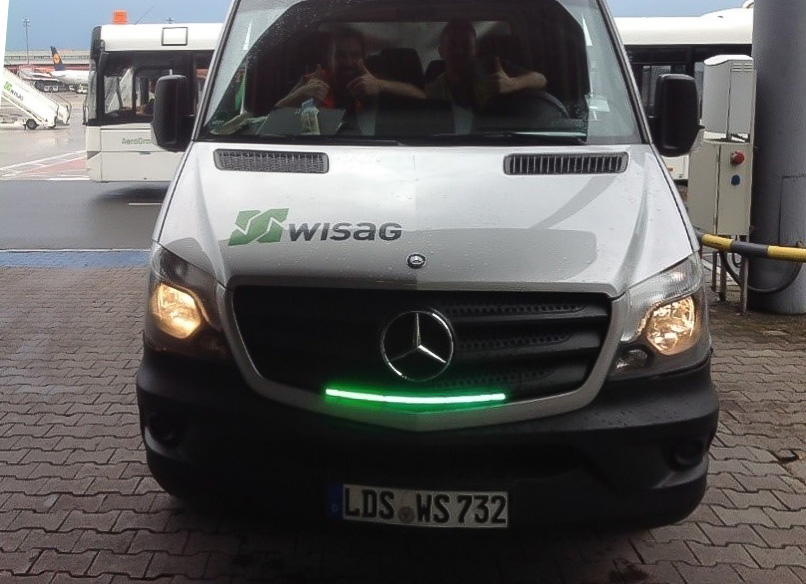 Given the complex triangular relationship between human, vehicle and environmental factors, advances in traffic safety will always have to encompass a variety of innovations. One of these could be the front mounted brake light, a forward-facing lighting device that illuminates simultaneously with the rear brake lights and tells on-coming road users that the car is braking.

In 1971 an initial study was undertaken in the U.S. already on the usefulness of such a Front Brake Light with a number of private vehicles. Afterwards the participants just like a control group both considered the Front Brake Light to be useful in communicating with other drivers and pedestrians – especially under conditions of poor ambient lighting as well as to communicate behavioural intentions.

To examine this more closely a laboratory study took place in 2016, which also highlighted the information asymmetry between motor vehicle drivers and pedestrians. Whilst drivers may fall back on direction of movement and body language of pedestrians to understand their intentions, pedestrians themselves have – especially when facing oncoming traffic – very few indications as to the intended behaviour of drivers.

Without any special signal in the front of a vehicle (i.e. a Front Brake Light) it is significantly harder for pedestrians to perceive braking. This problem is of particular importance when either using pedestrian crossings or crossing side roads in front of turning vehicles; situations in which collisions commonly occur.

Building on this, a more extensive longitudinal field test was carried out at Berlin-Tegel Airport in 2017, in which both – the drivers of vehicles equipped with a Front Brake Light and other road users who had experienced those vehicles in live traffic – were questioned. The results of this also showed wide support and recognition for the concept.

Scope of application and potential benefits

The catalogue of possible applications of a Front Brake Light includes multiple cases to improve communication between road users and thus ensure greater traffic safety. Such cases are by no means limited to asymmetric conflicts (e.g. vehicle / pedestrian). Also in a vehicle / vehicle constellation the Front Brake Light has potential to avoid collisions.

Main benefits of a Front Brake Light are expected to be

A Front Brake Light must be regarded as a light-signalling function (LSF) within the meaning of authorization[1], as a version with a lower light intensity would not be fit for purpose.

For the conception of a new LSF on motor vehicles, there is always the question of the appropriate light colour to be used – as well from a legal as a factual point of view. As other colours are legally assigned already to special situations and / or special types of vehicles, choice is left between green and white.

Given the already existing high number and range of variation in forward-acting white light signals (dipped beam, high beam, fog lights, etc.), the use of a white Front Brake Light could result in ambiguous information being received, thus nullifying its benefit for traffic safety.

The colour green, however, is not used for LSF on motor vehicles yet, but therefore offers the advantage of unambiguousness and fast signal identification. Furthermore it is well known in road environment (i.e. traffic signals) and for purpose of a Front Brake Light will also be supported by psychological points of view against other colours, especially red.

It is assumed that the Front Brake Light is linked directly to the rear brake lights and thus only one more device must be connected to otherwise identical circuits in the control unit(s). With regard to the design of a Front Brake Light, a number of variants are conceivable, depending on the type of vehicle and its vehicle design.

Therefore implementing a Front Brake Light within existing technical conceptions of vehicles is most easy from a technical point of view.

Front Brake Light within the framework of EU-objectives

Amongst its wide-ranging review, the European Parliament´s own-initiative report On saving lives: boosting car safety in the EU stresses that, “in order to improve road safety, the deceleration of vehicles should be rendered easier for other road users to perceive by means of clear signal lights on vehicles, and expects the compulsory use of an emergency braking indicator in the form of a flashing brake light or flashing hazard lights” [Nr. 37].

Mentioning signal lights for deceleration in general and not reduced to emergency braking, gives a strong hint to the need of permanent and regular signalling to the front, regarding that rear signalling of deceleration long exists.

Thus the presented concept of a Front Brake Light is absolutely in line with those objectives set out, in particular because by using the colour green it also provides the required uniqueness of the signal.

At the same time, the future requirements for compulsory driver assistance systems were raised in that report. It may be deduced that a system, fulfilling those requirements, especially complies with the objectives of the EU.

The actual effectiveness of the concept of the Front Brake Light in enhancing traffic safety, was proved within a two-stage procedure of scientific research (see above, scientific approach).

Consistently positive results of both studies, both in terms of improving response times and conceptual field assessment, demonstrate that the Front Brake Light could make a real and significant contribution to increasing traffic safety by supporting road users to analyse potentially critical situations more quickly and to avoid or master them better.

The complementary adoption of communication functions in the context of increasingly automated driving, which has hitherto been performed by the driver, as well as the potential reduction of stress contribute to an increase in overall road safety.

Last but not least, a potential reduction in collision severity must also be regarded as a significant increase in traffic safety from a biomechanical standpoint, since the consequences of a collision always form a significant part of the overall consideration.

On the other hand, there are moderate costs for material, design and processing costs, which, according to current estimates, should not exceed € 30 per vehicle in mass production. Thus, no significant effect on the total cost of a motor vehicle is apparent.

However, within the context of traffic safety, financial costs are not the only relevant considerations. Human and emotional “costs” are as important, in particular the avoidance of human suffering caused by traffic collisions.

The required technology to implement a Front Brake Light is available. Its introduction does not depend on further technical innovation.

(No) financial burden on the citizen

As the Front Brake Light is a low cost system, there is no reason why the total costs of vehicles should increase.

Integration into the Periodical Technical Inspection

Being a “simple” light-signalling device, the Front Brake Light it is easy to integrate into the procedure of periodical Technical Inspection.

Legal framework /next steps for introduction

Necessary for the introduction of a Front Brake Light will be to alter or to extend two parts of the EU legal framework on type approval:

Ideally, these steps would be agreed on internationally at the level of the Vienna Convention. However, due to the large number of negotiating partners, such an approach seems unrealistic in a timeframe appropriate to the EU’s objectives for reducing the number of road deaths; same with changing the framework of (UN) ECE type approval regulations.

Therefore the most sensible and promising way to achieve that gain in safety for road users in the EU as soon as possible, appears to be via the EU’s legislation itself. Accordingly, it would be desirable those changes to be implemented as EU-specific extensions within the scope of the respective application provisions of ECE type approval regulations for the EU area. Further progress would then be in line with the normal course of action under EU regulations and directives.

The Front Brake Light should be recognised as an additional, cost-effective and easily implementable measure to reduce traffic collisions, not least in terms of reducing the actual risk to pedestrians.

After all it can be stated, that the conception of the Front Brake Light would even comply with the high requirements set by the European Parliament for driver assistance to become compulsory.  All the more then it must be possible to introduce such a system as a “milder remedy” on a voluntary basis.

Since the beginning of the research and increasingly from the beginning of 2018, the concept of a Front Brake Light has already been presented to an enlarging number of experts in traffic safety research. It should be noted that the concept was generally positively regarded.

It is assigned to the EU, to make more road safety happen!