Psychological effects of the colours green and red

“The blue, as an opposite movement, slows down the yellow, and finally, with further addition of blue, both opposing motions destroy each other and complete immobility and calmness arise. It is green.”

This quotation by Kandinsky, which is listed in the handbook of the Lüscher colour test (Lüscher, 1949), symbolizes the associations aroused by the colour green: Calm, peaceful and serene (Wexner, 1954). At the same time, however, it also draws attention to the problem which, according to Valdez and Mehrabian (1994), has hindered previous research into the psychological effects of colours. Hardly any empirical approaches have been used to measure the psychological effects of coloured stimuli reliably and validly. Instead, one finds many everyday psychological statements and speculations.

Furthermore, Valdez and Mehrabian (1994), Gorn, Chattopadhyay, Yi and Dahl (1997) as well as Suk and Irtel (2010) showed that the actual hue is of less importance than the brightness and the saturation of the colour. However, if these influences are controlled, the empirical data show a picture contradicting everyday psychology. Valdez and Mehrabian (1994) had volunteers rate different colours on the Pleasure Arousal Dominance Scales (PAD, Mehrabian, 1978) and showed that green was perceived as more exciting than, for example, red or yellow. Wilms and Oberfeld (2014) also showed that the more saturated the green, the greater this effect became. On the pleasure dimension, green was able to achieve higher values than either red or yellow, and values higher than red on the dominance dimension.

On the basis of these results, it could be concluded that, due to its exciting and dominance-inducing effect, green is definitely suitable as a colour for the Front Brake Light, as it indicates a braking process and thus signals to other road users that they can soon start moving. It is not for nothing that green is used as a signal to proceed in traffic lights in most countries of the world. A corresponding intuitive knowledge of a green Front Brake Light could thus be assumed. Nevertheless, it is advisable also to check the effect of the colour green in road traffic on the basis of empirical data.

Chen, Chang, Chang and Lai (2007), for example, showed that motorists accelerated faster at traffic lights equipped with a green countdown device than at traffic lights with red countdown devices. This result also shows that green is more likely to be perceived as a start signal in traffic than red. The results of a study by Elliot, Maier, Moller, Friedmann and Meinhardt (2007) have at least an indirect relation to traffic safety. In an anagram task which measured, inter alia the ability to concentrate, subjects made fewer mistakes when exposed to green rather than red light. If green light increases the ability to concentrate, then it could help prevent a false interpretation of the signal of a green Front Brake Light and thus increase traffic safety. Elliot et al. (2007) also associated the colour green with the construct of the ‘approach motivation’, whereby a green Front Brake Light could facilitate an approach to a critical situation and favour a correct solution.

A. Study on traffic-related associations of the colours green and red

Given the sparse literature on the perceptual and traffic psychological aspects of the colour green, a separate empirical study was conducted to investigate the nature of the problem; namely the association of the colours green and red with traffic-related content. For this purpose, a sequential priming paradigm was used. It was assumed that subjects respond more quickly to “Los” words (“Los” meaning “go”) associated with starting or moving forward after being shown the colour green than after being shown the colour red (hypothesis 1).

Priming paradigm. Four different coloured squares (green, red, blue and orange) were used as the prime stimuli. The size of the squares was determined by screen size, with the height and width of the squares each defined by 40% of the screen height. Influences of saturation and brightness were kept constant by using equal values for all colours (saturation: 100%, brightness: 100%). The target stimuli were “Los” (start, accelerate, go, start) and “Stop” words (pause, slow, delay, hold, Stop), each presented in black (2.50% screen height).

“Participants were instructed to respond to each word displayed as quickly as possible, but to make as few mistakes as possible. Approximately half of the particpants were instructed to respond to “Go” words with the “x” key and to “Stop” words with the “m” key, for the other half of the participants the key assignment was reversed. The participants were also warned that, before each word, a coloured square would be briefly presented which they should ignore.”

The stimuli were presented in a total of twelve blocks, each block comprising 40 trials. Between each block, the subjects had the opportunity to take a break and were then reminded again about the relevant key-word combinations. The 40 trials in each block consisted of a random combination of one of the four prime images and one of the ten target words (drawn without replacement), so that, for each block, there were four trials per combined condition (colour and “Los” or colour and “Stop”). After a pause of 310 ms, the respective prime was presented for every 125 ms before the target appeared. The target was displayed until a reaction occurred. In the case of an incorrect assignment, a red error cross was displayed for 200 ms. There was a pause of 100ms after each trial before the next trial started.

Manipulation check. To rule out colour vision problems or other visual deficiencies, the subjects were presented with the four colour primes and asked to determine the colours of the squares (green, red, blue and orange).

Procedure. The survey period began on 22th February, 2018 and ended on 27th February 2018. The study was conducted online using Inquisit software (https://www.millisecond.com/). After the volunteers had agreed to participate in the study and answered the demographic questions (gender, age, educational status), the priming paradigm was undertaken. Finally, the colour identification task was performed as a manipulation check. The duration of the study was about 15 minutes.

Data analysis. Firstly, the answers in the colour identification task were analysed to exclude any influence of potential visual impairment. Thereafter, the mean response times (ms) and errors (%) in the twelve blocks were used to form baseline-adjusted difference scores from compatible and incompatible trials, which could be used to determine reliabilities. Trials with response times below 250 ms and above 1500 ms were excluded. For the baseline, means of the trials with the colours orange and blue were computed. The hypotheses were tested using a repeated measures ANOVA followed by post hoc t-tests. 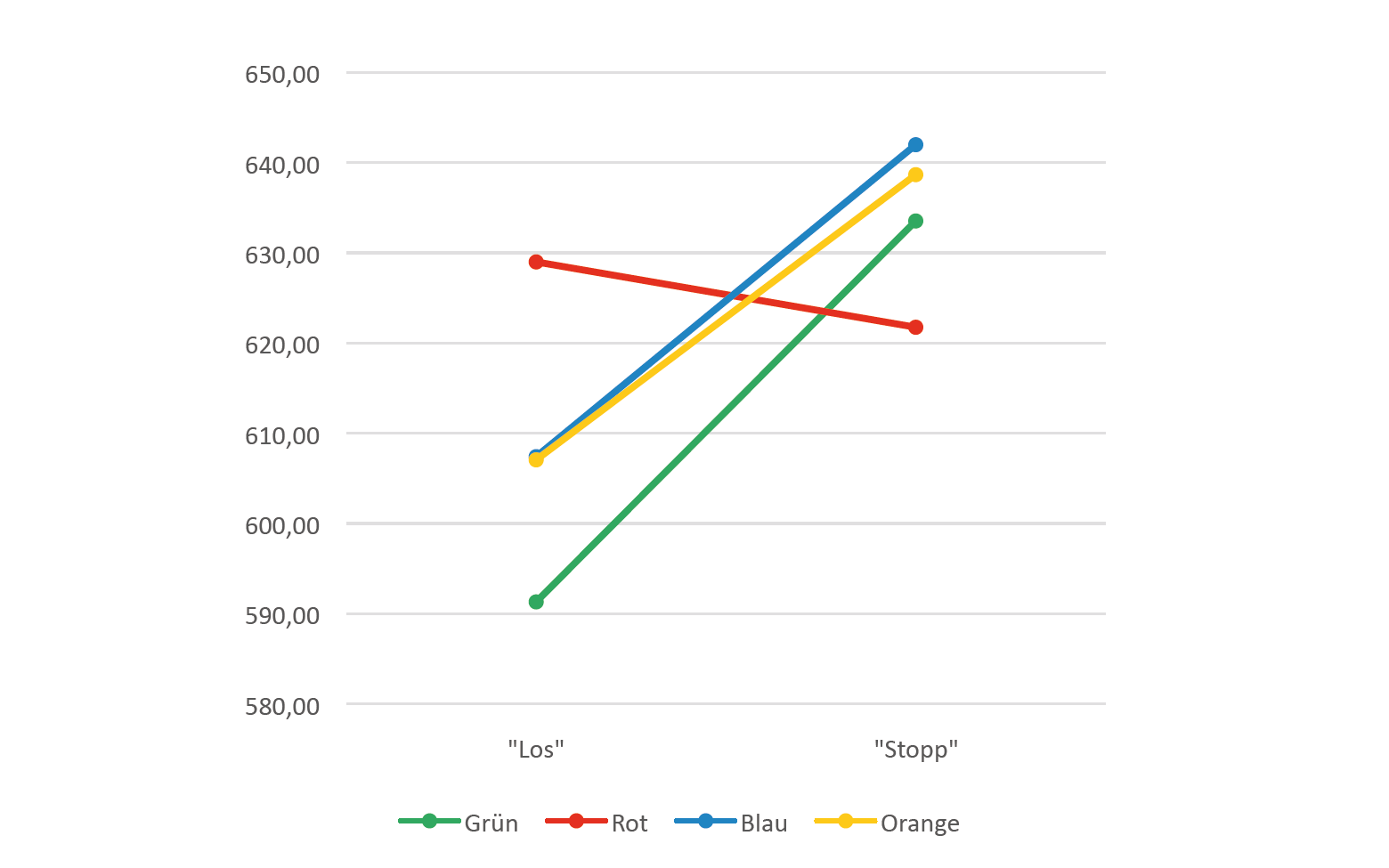 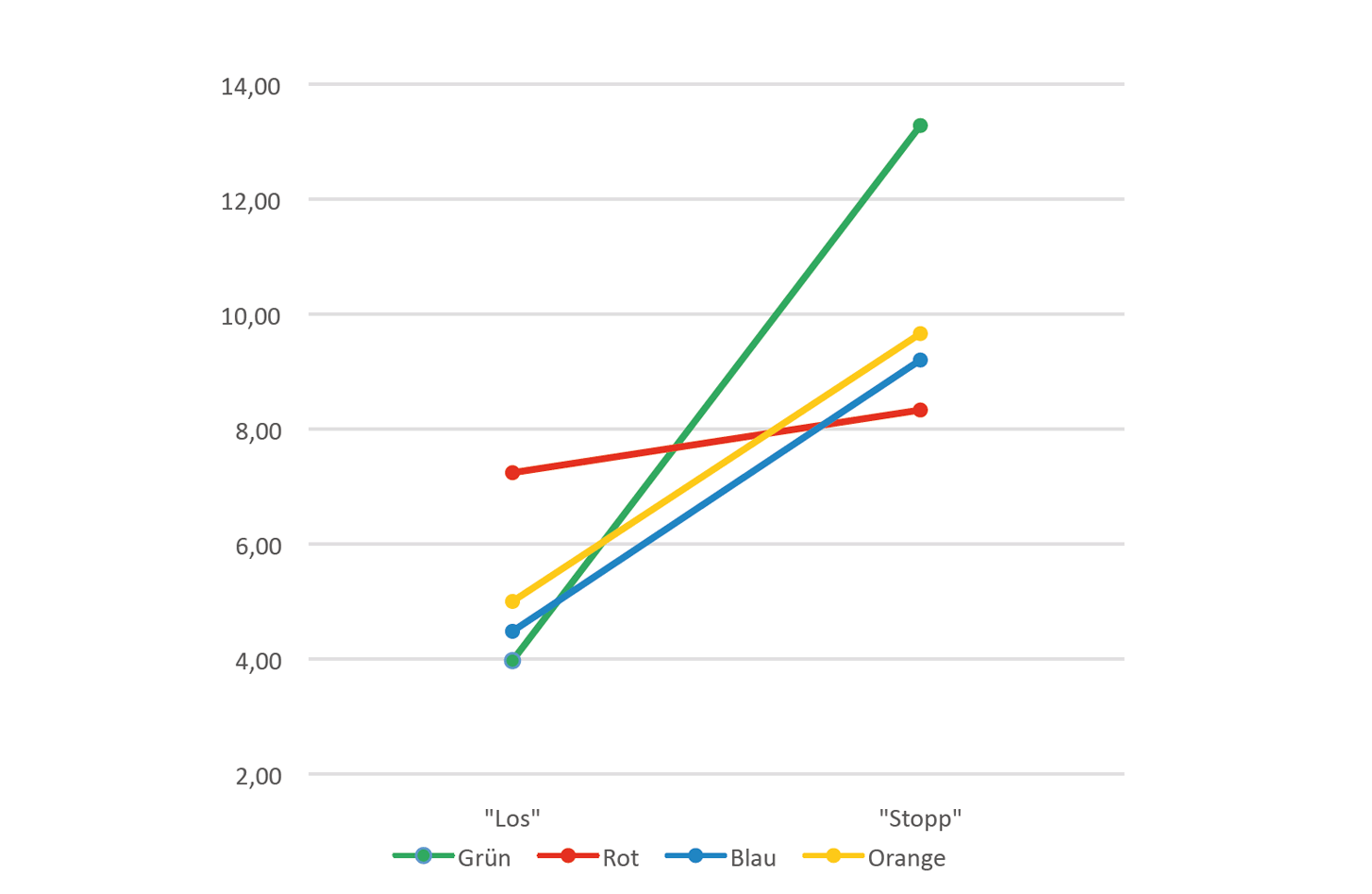 Fig. 2: Mean error rates (%) as a function of colour prime and word target.

Both response time and error rate results provided significant key effects for the target and colour factors. Subjects responded faster to “Los” targets and made fewer errors than on “Stop” targets, which theoretically makes sense because of the stimulatory nature of the “Los” words. The reaction times after the colour green were on average shorter than those after the colour red, thus underlining the stimulatory nature of the colour green. At the same time, most errors were found for the colours green and red, which is contradictive to Elliot et al. (2007). On the other hand, there were no instances of incompatible combinations of orange and blue caused by pre-existing associations.

For “Los” targets, subjects responded faster (confirming hypothesis 1) and made fewer errors (confirming hypothesis 3) if they were previously presented with the colour green than if the colour red had previously been presented (see Chen et al. 2007). This result can be explained in terms of the real-life experiences of the subjects (e.g. in road traffic), where green is understood as a signal for safety and as an invitation to go, whereas red is associated with the perception of danger and a signal to stop (Pravossoudovitch, Cury, Young, & Elliot, 2014). In addition, the response times and error rates for greenprime “Los” words were smaller than those for blue or orange primes, highlighting the importance of colour green as a security signal compared to other colours such as red.

In contrast, respondents did not respond more quickly to “Stop” words if they were previously shown in red than if they had previously been shown the colour green (rejection of hypothesis 2). Possibly, there is only a marginally significant difference between green and red, since the intuitive reactions to the colour red are attenuated and thus slowed down by the slower “Stop” reaction by reflexive processes. Apart from that, the difference in error rates in response to the “Stop” targets became significant: fewer errors occurred after red primes than after green primes (confirming hypothesis 4). These effects could also be due to the strong association of green with security and red and uncertainty (Pravossoudovitch et al., 2014). Again, the meaning of the colour green manifests itself as a security signal against other colours, since the error rates for “Stop” words after green primes turned out to be higher than after blue or orange primes.

Limitations. Based on reaction times and error rates in a sequential priming paradigm, the present study provides strong evidence that the colour red is associated with “Stop” words and the colour green is associated with “Los” words. Only the association of red with “Stop” words on the basis of reaction times became marginally significant, which, however, can be attributed to the sample size. For a larger sample, this effect would probably also have been significant. Another limiting factor is the high level of education in the random sample, although it can be assumed that the associations found also can be found at a lower level of education, as people of all educational levels are on the road and thus able to build up corresponding associations.

On the basis of the results of the present study, the suitability of the colour green for a Front Brake Light can be established, since green was associated by the test subjects with words of forward movement and the Front Brake Light is designed to arouse the readiness to act accordingly, i.e. to “go” or to “proceed” (cf. arousal, Mehrabian, 1978). In contrast, words of braking/decelerating are associated with red, whereby a red Front Brake Light would signal other road users to stop. This is the case, for example, with conventional brake lights, where the rear brake light is intended to indicate braking so that the vehicle behind also stops and a rear-end collision is avoided. In conjunction with a Front Brake Light, however, this would be counterproductive. From a psychological point of view, the result of this study is that for a Front Brake Light the colour green should be preferred to other colours such as orange and blue, but especially to the colour red.